The Pichi Richi Railway Preservation Society has been operating historic steam trains from Quorn in the Flinders Ranges since 1974.

The Society is dedicated to the preservation of the first leg of the original North-South Railway, the Port Augusta to Government Gums Railway through Pichi Richi Pass between Quorn and Port Augusta.

Construction of the original line was commenced at Port Augusta in 1878, reaching Quorn in 1879, and Oodnadatta in 1891. Initial operation was by the South Australian Railways as their Great Northern Line.

In 1911 under the Northern Territories Acceptance Act the railway was sold to the Commonwealth. The Commonwealth Railways was formed to link Western Australia with the eastern states with the construction of a new standard gauge line from Port Augusta to Kalgoorlie. The east-west link across the continent was finally completed in 1917.

Also the Commonwealth Railways extended the narrow gauge line from Oodnadatta to Alice Springs reaching there in 1929. The gap from Alice Springs to Darwin, to complete the North-South Railway remains to this day.

The line through Pichi Richi Pass became the only common section of east west and north south railways. Such famous trains as the Transcontinental and the Ghan travelled the route until the line was fully bypassed by alternative routes and closed in 1956.

It lay unused for 17 years until the Pichi Richi Railway Preservation Society was formed in 1973 to breathe new life into the old line.

Pichi Richi Railway trains for many years operated to Woolshed Flat from Quorn a distance of 16 Kilometres. In 1998 Stage 1 of the Pichi Richi Extension Project received support from the Federal Government Rail Transition Program with a grant of $1.35m. This enabled the remaining 16 kilometres of track to Stirling North (7km from Port Augusta) to be fully rehabilitated.

The final leg into Port Augusta Railway Station, a destination never thought possible in 1973 when Pichi Richi was formed became a reality on 2001 with the completion of 7 km of new track, running along side the main ARTC standard gauge line.

This stage was a joint venture between:

The project has been assisted by:

The construction of 7km of new track required the following:

To operate steam trains from Port Augusta to Quorn and return a basic preparation, running maintenance and secure storage shed and compound was constructed. The Port Augusta facilities consist of: 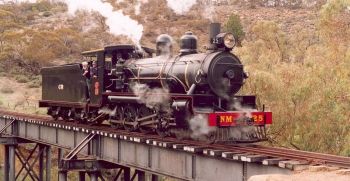 Book early to ensure you can be part of these unique historic events.
Buy your tickets from: