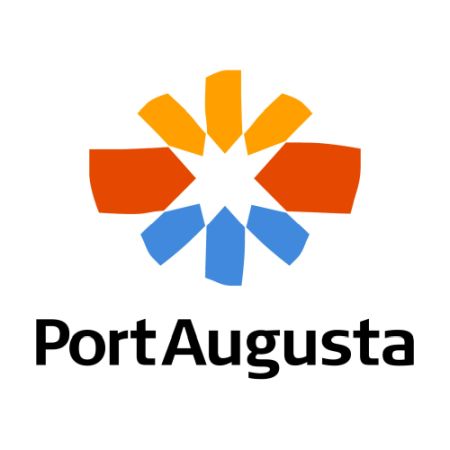 The Port Augusta logo is the visual embodiment of the Port Augusta brand.  Port Augusta's spectacular landscape, strategic 'top-of-the-gulf' location and traditional role as a meeting place and crossroads make it unique.

The landscape is represented by a broad terracotta horizon with blue gulf waters and golden sunlight.

The star represents Port Augusta as a bright burst of energy at the top of Spencer Gulf.

The star is made up of 8 arrows coming in from all points of the compass to denote Port Augusta's traditional role as meeting place and crossroads.

The spokes radiate from a central hub to denote Port Augusta's role as a major economic centre.

(2.2.02) Use of Councils official documents, brand and logo

Application Form for use of Logo

The Corporation of the City of Port Augusta

The Port Augusta Council logo has been in use since 1875, when the then three Local Government entities became the City of Port Augusta.

The logo is Council's coat of arms, and following is an explanation of some of the elements:

Port Augusta's early days centred on shipping, and the town was heralded and referred to as "the Liverpool of the South".

These were Port Augusta's earliest industries. Sheep farming continues today, but there is no longer any cattle.

Indicated the close association Port Augusta had during the early days of mining, and the Bent Arm with shears held aloft is connected with the sheep industry.

The English meaning of the latin phrase "Pro Res Publica" is "For the State".