Statue to honour the late Joy Baluch AM 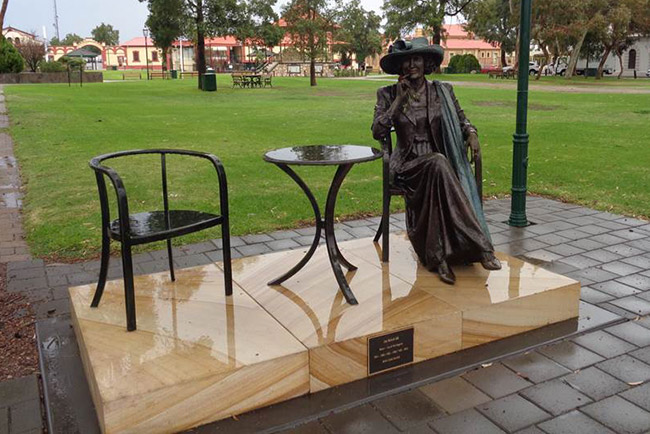 As a public tribute to the late Mayor Joy Baluch AM, a significant and courageous leader for Port Augusta for more than 40 years, a bronzed sculpture was unveiled on Tuesday, 20th October 2015 in Gladstone Square.

The sculpture is the work of well renowned sculptor Linda Klarfeld who was commissioned to create the piece that captures the spirit of the late Mayor. Her works include bronzed statues of the late Dr Victor Chang, Cricketer Keith Miller, and Saint Mary Mackillop.

About Mayor Joy Baluch AM

The late Mayor Joy Baluch AM was a determined and passionate leader, who spearheaded social change in Port Augusta. Mrs Baluch was an icon and well-known around the country for her passionate support for her City at "the centre of the universe"

As well as being a strong advocate for Port Augusta at a State and Federal Level, she also ran numerous successful businesses during her time as a Councillor and Mayor and was a mother and grandmother. Over four decades she left her mark on Local Government and served on numerous committees and boards, including member and President of the Local Government Association of SA, Chair of the Provincial Cities Association, and Chair of the Upper Spencer Gulf Common Purpose Group.

She was a fierce adversary who fought strongly for Port Augusta, the Spencer Gulf, the State’s provincial cities and local government generally. Mayor for 29 years, Mrs Baluch was widely respected due to her straight talking manner, strong will, and compassion. Her sense of humour, down-to-earth manner and colourful vocabulary made her well-liked.

As a tribute to Mayor Baluch AM, the bronzed statue is located in the Port Augusta City Centre, in the park facing the Council Chamber where she presided for almost three decades.

Speech for the Unveiling of the Joy Baluch AM Statue

I’d like to welcome you today to the unveiling of a statue that honours the late Mayor Joy Baluch AM.

Following the passing of Mayor Baluch in May 2013, the former Council resolved to commission a bronze statue to honour her commitment and dedication to Port Augusta and the region through her role in local government. Renowned sculpture artist, Linda Klarfeld, was commissioned by Council to create the bronze statue which will be a significant piece of public art.

To assist with the cost of the statue, a small but dedicated community group led by Anne Kroes set about raising funds. There was also an opportunity for members of the community to make donations directly to Council with a total of $35,226 raised.

Donations were also sought from the Local Government industry; and Council received good support with $7,400 being contributed. The remaining $27,826 which includes $5,000 from the Outback Communities Authority was raised by the local fundraising group. Council acknowledges and appreciates the extra-ordinary efforts of this fundraising group.

Plaques have been placed around the base of the statue to recognise the significant contributions and also pay special tribute to the fundraising group and the community.

There are many people who have made this statue a reality and on behalf of Council I sincerely thank everyone who has in any way contributed towards making the unveiling of the statue possible.

Today is an occasion where we reflect on the life of Nancy Joy Baluch and the decades of service she dedicated to not only Port Augusta and the Spencer Gulf region, but also to Outback communities.

Serving 11 years as a councilor before first being elected as Mayor in 1981, Joy led the city for 29 years as Mayor until her passing. She was ousted from the role on two occasions but was quickly returned both times at the subsequent elections.

There is no doubt that Port Augusta would not be the city it is today without her passionate, fearless and committed leadership.

Her strength, determination, and vision for Port Augusta is well known and her at times colourful language legendary. Along with these qualities she also proved to be a progressive thinker and supported changes that worked for Port Augusta, despite being unpopular at the time in the broader national community.

When Mayor Baluch was first elected, Port Augusta had a reputation of being an industrial town, with tourists neither wanting to, nor encouraged to stop.

Due to her foresight and leadership, Port Augusta has diversified its industries to include tourism which continues to be a growing industry and sees tens of thousands of visitors now stay over in the city every year and contribute to the local economy and employment.

Joy led the introduction of dry zones in Port Augusta which at the time drew national criticism. They are now common place in towns and cities around Australia. Through her persistence over many years, social change was also achieved to include the Substance Misuse Service, construction of the Lakeview Accommodation Centre, the City Safe Program, and the development of the Urban and Regional Strategy.

Joy was a strong supporter of development in Port Augusta which resulted in the transformation of the foreshores and development of the Oasis Apartments. She was instrumental in driving Council projects such as the
Wadlata Outback Centre, the Australian Arid Lands Botanic Garden, Shack Road Sealing, Waste Water Treatment Plant , the Port Augusta Cultural Centre – Yarta Purtli, Waves Skatepark; and more recently -the new Airport Terminal upgrade, and our ‘state of the art’ sporting and community precinct - Central Oval.

In recent years she was a strong advocate for green energy, supporting the Port Augusta Repower campaign and the Sundrop Farms enterprise.

Changes in Port Augusta didn’t happen quickly but Joy was unwavering in her vision to create a vibrant city and the social changes she managed to instigate have seen Port Augusta become a model for other towns. The same can be said about development with the foreshore upgrade replicated by other regional waterfront councils, and the Central Oval community hub, now on the agendas of a number of other councils.

And while Joy fought the hard issues and was a very tough opponent for any politician or those seeking to stand in the way of progressing her city, she was also very compassionate and caring, and took the time to get to know many people and their issues in Port Augusta.

As a woman, Joy was a trailblazer, entering local government at a time when few women dared to tread into the male dominated territory and then took the challenge further to become Mayor. One of Australia’s highest profile Mayors, time with Joy was sought by many Australia wide, and as a wife, mother and grandmother, time was sacrificed with her family.

For all those that knew Joy no one was ever left wondering what she thought. She was strong- willed, determined, intelligent, hard working, influential and passionate, but also had a great sense of humour and was caring, and compassionate.

Above all, she was a great leader that changed Port Augusta’s fortunes to become the city it is today, which has diversified its industries to no longer be reliant on just power and rail, but now has beautified foreshores, quality tourism facilities and a vibrant arts and sporting culture.

Today we honour Joy Baluch’s achievements and we place her statue where it rightly belongs, “in Mrs B’s beloved Gladstone Square in the heart of Port Augusta” which, in her words, is at “the Centre of the Universe”.