A widespread, well-liked moderately sized fighting fish, the yellowtail kingfish (Seriola lalandi) is from the Carangidae family and bears a close resemblance to the greater Amberjack, to which it is related.

It is a coastal schooling fish and a fast swimmer. Found on both sides of the equator, in Australia, it is recorded around the coast from North Reef, Queensland to Trigg Island, Western Australia, and as far south as Tasmania. 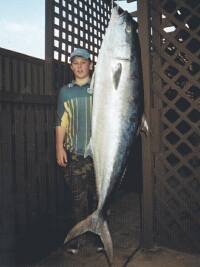 The Yellowtail Kingfish can grow up to 2.5m in length and can weigh up to 70kg.

Yellowtail can be taken on trolled or cast oily live bait or on lures. They do well in blue water, but are often caught close in-shore by handline fishermen. On occasions, whole shoals may follow a hooked or struggling fish to the surface, providing waiting anglers with an easy catch. The yellowtail is generally regarded as a good eating fish. 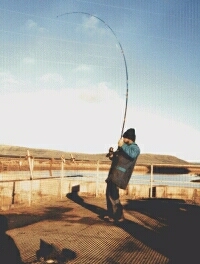 The fish pictured above were caught by local fishermen.